These high school sports have the highest concussion rates

When it comes to concussions in high school sports, there is good news and bad news, a new study suggests.
The rates of football practice concussions and recurrent concussions across all sports have gone down in recent years, according to the study, published in the journal Pediatrics on Tuesday. The bad news: Concussion rates increased in football games.

“These results matter for all stakeholders involved in high school sports: parents, coaches, athletes, as well as researchers,” said Avinash Chandran, a post-doctoral research associate at the University of North Carolina at Chapel Hill, who was an author of the study.
“This study updates our understanding of concussion patterns in high school sports using injury surveillance data,” he said. “It adds to our existing understanding by providing the most recent ‘time-stamp’ in concussion incidence in high school sports.”
The study found trends in concussion rates not only for football but also more than a dozen other sports, including soccer, ice hockey and cheerleading — which were among the sports with the most concussion incidence.
The study also found that among all sports, there was only one in which the concussion rate was higher during practice than in competition.

Those sports were: boys’ football, wrestling, soccer, basketball, baseball, cross country, ice hockey, lacrosse, swimming and diving, and track and field; girls’ volleyball, soccer, basketball, softball, cross country, field hockey, lacrosse, swimming and diving, and track and field; and coed cheerleading.
The data came from the National High School Sports-Related Injury Surveillance Study database, or HS RIO.
For the study, a concussion — a type of traumatic brain injury caused by a bump, blow or jolt to the head — was defined as occurring as a result of practice or competition, requiring medical attention and being diagnosed as a concussion.
For each sport, the rate of concussion was measured as the occurrence of a concussion per each exposure athletes had to participating in their respective sport, either in practice or competition.
Overall, the data showed that the three sports with the highest concussion rates were: 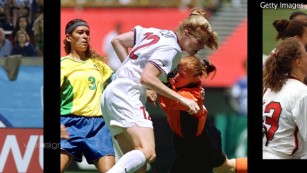 The study found that across all sports, most concussions — 63.7% — occurred during competitions. Only one sport had a concussion rate higher in practice than in competition: cheerleading.

The researchers noted in the study that where and how cheerleaders practice could play a role in that finding, but more research is needed.
“For instance, unfortunately, not all states recognize cheerleading as a sport — which may impact the conditions in which cheer squads may practice,” Chandran said, which could be in hallways or on asphalt, putting them at higher risk of concussion.
“It is also possible that cheer squads have less access to medical care and coaching support than other high school sports,” he said, referring to the observed patterns in practice.

The study had some limitations, including that only data from high schools with athletic trainers were included, and most of the data were based on athletes disclosing concussion symptoms during either a competition or a practice.
“Underreporting may have occurred if players chose not to disclose concussion symptoms, thus compromising our ability to fully understand athlete injury histories,” the researchers wrote in the study.
In the United States, more than 800,000 traumatic brain injury-related emergency department visits, hospitalizations and deaths occur in children every year, according to the US Centers for Disease Control and Prevention.
These types of injuries have become more concerning as youth sports have grown in popularity and because research has shown that repeated blows to the head, such as from playing football or heading a soccer ball, can lead to long-term memory loss, dementia and other serious health issues.
More research is needed to determine exactly why certain trends in concussion rates have been found, since the new study only examined incidence and trends, but experts have some ideas.

‘The legislation is having impact’

The top sports with the highest concussion rates in the new study came as no surprise to Dr. John Leddy, a primary care sports medicine physician, clinical professor and medical director of the Concussion Management Clinic at the University at Buffalo in New York, who was not involved in the new study.

“In our area, it’s boys’ football and boys’ hockey, followed by girls’ soccer, cheerleading and girls’ hockey,” Leddy said, referring to the types of athletes treated at his clinic.
The new study also found that, overall, 8.3% of reported concussions were recurrent, but rates of recurrent concussions decreased between the 2013-2014 school year and the 2017-2018 school year — which Leddy called an “interesting” trend.
“There was reduced rate of recurrent concussions, and I think that speaks to the fact that we now have legislation in every state that says you have to pull a kid out of sport when a concussion is suspected and the child can’t return to play until being cleared by a physician,” he said.

As of 2015, all 50 states have adopted some form of concussion legislation with minimum return-to-play guidelines for students who have had concussions.
“It’s been shown in college athletics that that introduction of the mandatory removal and then a return-to-play progression has really reduced the rate of recurrent concussions,” Leddy said. “I think that’s what’s happening here in high school sports — that shows, I think, the legislation is having impact.”
Laura Dreer, an associate professor at the University of Alabama at Birmingham, agreed that the study’s findings may be a reflection of return-to-play legislation — but she would like to see the findings validated with more rigorous research.

“It could be that there’s more education awareness. All 50 states now have laws in place for return-to-play and all high school coaches have to go through training,” said Dreer, director of psychological and neuropsychology clinical research services in the University of Alabama at Birmingham’s Department of Ophthalmology and Visual Sciences, who was not involved in the new study.
She praised the study for shedding light on the public health issue of concussions, which she said often gets more attention at the collegiate and professional sports levels than in high school sports.

“It really starts with the kids,” Dreer said.
By the time young athletes make it to collegiate or professional levels, “the damage is done,” she said. “We need more studies at the high school level, and even backing it up further with the little kids, to get more longitudinal data and better understand this issue so we can do things to prevent it, manage it and hopefully keep kids safe but active as well.”